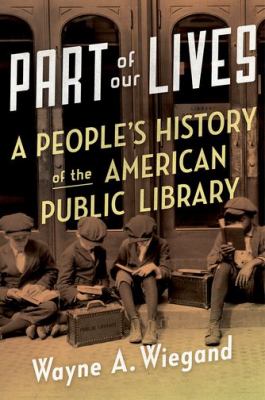 Several months ago a dear friend of mine turned me on the the following book: Part of our lives : a people’s history of the American public library by Wayne A. Wiegand. While my friends business is about helping users find the next book to read (think the best recommendation engine you can imagine, but done by humans, for humans), this particular recommendation was simply more about the fundamental value we have for libraries, not so much as a means of shaping society, but at a much more personal and fundamental level. For me, the Library was a safe place where I could run away to and learn that the world was a more wonderful place than the block I grew up on.

“Despite dire predictions in the late twentieth century that public libraries would not survive the turn of the millennium, their numbers have only increased. Two of three Americans frequent a public library at least once a year, and nearly that many are registered borrowers. Although library authorities have argued that the public library functions primarily as a civic institution necessary for maintaining democracy, generations of library patrons tell a different story. In Part of Our Lives, Wayne A. Wiegand delves into the heart of why Americans love their libraries. …

“Part of Our Lives challenges the conventional idea that public libraries are valuable mostly because they are essential to democracy. Instead, this book uses the voices of generations of public library users to argue that Americans have loved their libraries for the useful information they make accessible; the public spaces they provide; and the commonplace reading materials they supply that help users make sense of the world around them”–

I didn’t know much about Wayne A. Wiegand before reading this book. Now that I do, I’m finding some of his other works available in my local library are next on my reading list.

But it doesn’t end there. What I love about my library is the ability to further find books that are similar in tone, pace, character development, writing styles etc.

I love my library!

Skip back to main navigation